The Plastic Busters project will facilitate the efforts of decision makers and stakeholders in effectively dealing with the issue of marine litter by supporting the implementation of the Regional Plan on Marine Litter Management in the Mediterranean. The improved knowledge on the occurrence, amounts, sources and impacts (including socio-economic impacts) of marine litter gained within the project, will underpin the implementation of joint, coordinated and/or complementary actions to manage human activities generating litter, while showcasing a wide range of no-regret measures that could be replicated in all Mediterranean countries.

Marine litter represents a serious threat to the marine and coastal environment of the Mediterranean as illustrated by the research activities conducted so far. Information on amounts, trends, sources and impacts (including socio-economic) of marine litter is limited, however it is widely accepted that both the levels of marine litter and the rate of input into the oceans are rising. Increased levels of marine litter originate largely from land-based activities (~80%), in particular from inadequate urban solid waste management at all stages (collection, transportation, treatment and final disposal). According to the European Environmental Agency (EEA), the average amount of municipal solid waste produced in the EU is 520 kg per person/year and is projected to increase to 680 kg per person/year by 2020. While solid waste generated in non-EU Mediterranean countries is still approximately half the per capita level in the EU, waste generation in the southern Mediterranean region has grown approximately 15 % over the last decade, mostly due to a growing population and increased consumption. A crucial aspect of the marine litter issue, also underlined by the Barcelona Convention within the Regional Plan for Marine Litter (Istanbul 2013) is that “Marine pollution knows no border, pollution in one country affects all other 21 countries” hence there is a need for a regional approach.

Marine litter has become a pervasive pollution problem affecting all of the world seas. It is widely documented that marine litter, such as plastics and derelict fishing gear, have negative impacts on many aspects, including human livelihood, marine wildlife, marine ecological systems, beach quality, navigational safety, economic well-being of states and fishing and maritime industries. A recognition of the scale of the problem has resulted in a number of formal and informal initiatives at global, regional (e.g. OSPAR, UNEP Regional Seas Programme), European (e.g. MSFD), national and local scales. 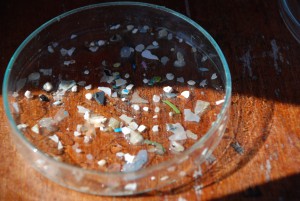 The threats to marine life are primarily mechanical due to ingestion of plastic debris and entanglement in packaging bands, synthetic ropes and lines, or drift nets. The list of affected species indicates that marine debris is affecting at least 267 species worldwide, including 86% of all sea turtle species, 44% of all seabird species, and 43% of all marine mammal species. In the Mediterranean, some pelagic fishes have shown to have ingested up to 70% marine litter and 41% affectation by either entanglement, ingestion or drafting and colonization at endangered species under IUCN classification.

Sound, shared scientific knowledge and coordinated and multi-sectorial actions are key to combating marine litter. More information on marine litter, sources and pathways, plastic and micro-plastic input into the sea, interactions with marine life, bacterial decomposition, spatial and temporal distributions (including transport dynamics) and potential accumulation areas is required. A process to localize permanent or quasi-permanent convergence zone areas and identify types of litter items and chemicals adsorbed on or leaching from litter items and their environmental effects will allow to prioritize and come up with a set of key mitigation measures/actions needed to be put in place to reduce the environmental, social and economic risks connected to marine litter thus directly facilitating the implementation of the Regional Plan in the Mediterranean countries. The detrimental effects of marine litter and plastics in particular on marine organisms represent a threat to the entire Mediterranean biodiversity and ecosystems. However, the presence of marine litter in the Mediterranean basin and its effects on biodiversity, ecosystems and socio-economic situation of coastal communities have yet to be thoroughly assessed.