Within the framework of the global UN “Sustainable Development Solutions Network (UNSDSN)” directed by Prof. Jeffrey Sachs, the University of Siena coordinates the first Regional SDSN Center for the Mediterranean, called MED Solutions. MED Solutions is a network of universities, research centers and businesses identifying and promoting sustainable solutions in the Mediterranean region. Experts in different disciplines were invited to the first MED Solutions conference which was held in Siena, Italy, in July 2013 to identify the first set of sustainable development solutions and they selected Plastic Busters as flagship solution. The University of Siena has a wide experience in collection of data on microplastics in the Mediterranean sea and in the ecotoxicological effects of plastic derivates on bioindicator organisms. The University of Siena support monitoring activities of microplastics in MSFD in Italy.

In particular, the Biomarker laboratory of the Department of Physical, Earth and Environmental Sciences, the promoter of the project, gave a key contribution to the development of the biomarker approach in terrestrial and marine ecotoxicology since 1990.. The main research has focused on: development of ecotoxicological test in bioindicator organisms for off-shore and on-shore oil extraction, evaluation of endocrine disruptors in marine species, assessment of cetacean ecotoxicological status in Mediterranean Sea,  Gulf of California, Australia, investigation on presence and effect of macro and microplastics and plasticizers in Mediterranean ecosystems. The group developed innovative diagnostic tools for ecotoxicological assessment of threatened species (marine mammals, birds, reptiles) bringing to the establishment of methods (non-destructive biomarker approach) currently acknowledged as golden standard at the international level.

Biomarker laboratory published the first papers on effects of on Endocrine Disruptors in Mediterranean marine top predators (pelagic fish-swordfish- and cetaceans) and long-living organisms (sea turtles). They provided the first evidence worldwide on the effects of microplastics on baleen whales. Biomarker laboratory was involved in intense scientific communication and dissemination activity (media, magazines, web, films) about the ecotoxicological effects of contaminants in the Mediterranean fauna and on the effects of microplastics and in marine organisms. 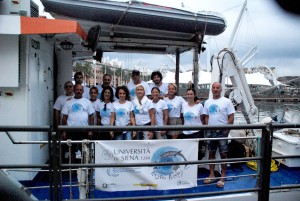