More than 220 participants, including national and international guests, attended the event with over 100 presentations and 60 posters. One of the most discussed topics was marine litter in the Mediterranean Sea, an area considered one of the 25 ‘hot spots’ of biodiversity at planetary level where biological richness coexists, however, with very strong anthropic pressures, such as marine litter.

In this context, the University of Siena presented some of the main initiatives on this issue, both at national and international level, in particular the projects financed by the Eni CBC Med Programme, COMMON and Plastic Busters CAP during the side event “Marine Litter Policy Advances in The Mediterranean”. 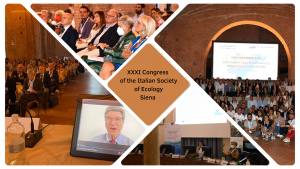 One of the solutions to the problem of marine litter, proposed by the projects, is the coordination of marine monitoring actions, which involves the harmonization of techniques for monitoring impacts on ecosystems and the coordination of mitigation and governance strategies at a regional level that, to be effective, must involve the south and north of the Mediterranean basin.

This website uses cookies to improve your experience while you navigate through the website. Out of these, the cookies that are categorized as necessary are stored on your browser as they are essential for the working of basic functionalities of the website. We also use third-party cookies that help us analyze and understand how you use this website. These cookies will be stored in your browser only with your consent. You also have the option to opt-out of these cookies. But opting out of some of these cookies may affect your browsing experience.
Necessary Always Enabled
Necessary cookies are absolutely essential for the website to function properly. This category only includes cookies that ensures basic functionalities and security features of the website. These cookies do not store any personal information.
Non-necessary
Any cookies that may not be particularly necessary for the website to function and is used specifically to collect user personal data via analytics, ads, other embedded contents are termed as non-necessary cookies. It is mandatory to procure user consent prior to running these cookies on your website.
SAVE & ACCEPT